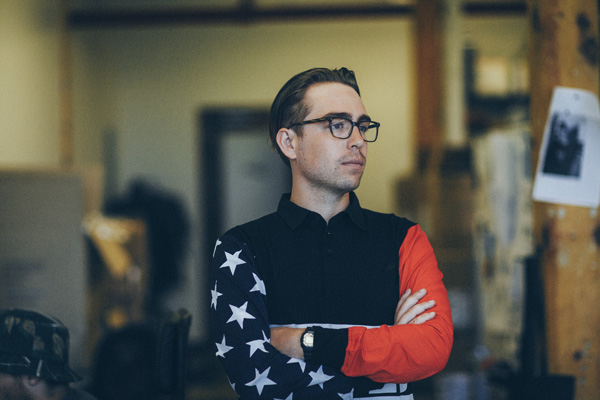 How did Raised by Wolves come to be?
Growing up skateboarding and snowboarding – a friend and I had the idea to start a clothing brand. We initially launched the first version around 2003 amongst our friends. It had a different name and just 1 logo tee… But it was fun and we gained a lot of recognition in the local scene, however, we really didn’t know where to take it. After several years of observing the industry and thinking of new names and deciding on a direction we officially came back to the market in 2008 as Raised by Wolves with some graphic tees and made in Canada beanies.

Just how would you define the brand, both in terms of aesthetics and creative/social statement?
Aesthetically we draw inspiration from a number of places. A lot of it comes from the 90s/early 2000s skate and snowboard gear we grew up wearing, mixed with classic sports looks, a bit of Canadian heritage and a commitment to quality. Creatively/socially I would say we are looking to inspire people to follow their own path. It doesn’t matter where you come from or where you are: start with what you have and go for it.

Can you share with us about the whole creative process that precedes the launch of a new collection?
Very, very hectic.

In late August 2013, in an editorial at Highsnobiety you commented that there are plenty of brands that don’t make it out there because of some lack of organization – how difficult is it still to handle that balance, between being creative and dealing with the books, the reality?
Yes, I think this is very true and something we still struggle with on many levels. I think the important thing is taking the step to realize you can let go of some of the control and instead of trying to do everything yourself, invest in people who can do certain things for you – shipping, accounting, etc. Taking that step to free up the time needed to be creative and focus on the brand itself is important.

What really determines the success of a brand, the message, the time and the occasion?
The one constant in my opinion is someone or a group of people with a strong vision. That and being able to push that vision/message at a time when the market wants it or is ready for it.

Raised by Wolves recently collaborated with Publish – how did that come up?
I met the guys from Publish years ago when they first launched the brand and we’ve stayed in touch ever since. We’ve been mutual fans of each other’s work over the years… And it all came together recently.

You have a strong connection with the world of streetwear, ever since it started to really emerge to the global media arena – what are the major differences between then and now?
Yes, personally, I have been working on the media side of streetwear since 2005. Back then it was super scrappy, mainly just graphic tees… Not that far off from skate in my view, at least on the North American side. Since then it has grown and evolved and made its way onto the runways. There are still people just printing graphic tees on blanks, of course, but streetwear means so many things now and comes in so many forms. I guess the biggest difference is that the term is no longer restricted to a specific look. Also, tiny guys have become major players and past major players have disappeared. The landscape is always changing.

Finally, how do you foresee the future, regarding Raised by Wolves, and also the whole world of streetwear and the business surrounding it?
For Raised by Wolves… We have a few special projects in the works, including our first footwear collab, which is exciting. In terms of the world of streetwear and the business surrounding it… I think the only constant is change. I do feel as our generation takes center stage, our style and general outlook is becoming more and more accepted, so in that sense the business will keep growing and new niches with continue to emerge.